Watch the video from the October 4, 2012 panel on International Development and US Foreign Policy. 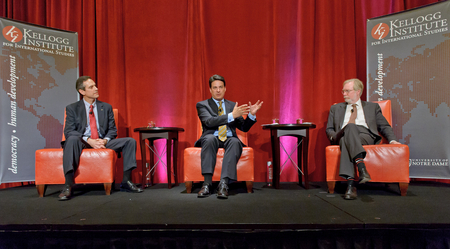 Renowned international development economist and policy advisor Paul Collier is the director of the Centre for the Study of African Economies and professor of economics and public policy at the Blavatnik School of Government at Oxford University.  His work investigates the causes and consequences of civil war, the effects of aid, and the problems of democracy in low-income and natural-resource rich societies. Among his many books are The Bottom Billion; Wars, Guns and Votes: Democracy in Dangerous Places; and most recently, The Plundered Planet: How to Reconcile Prosperity with Nature. He also writes widely for newspapers, including the New York Times, the Financial Times, the Wall Street Journal, and the Washington Post. Collier is currently advisor to the Strategy and Policy Department of the International Monetary Fund and to the Africa Region of the World Bank and has advised the British government on economic development policy. He has received numerous awards, including a CBE ‘for services to scholarship and development’ in the United Kingdom.

As the executive vice president for Overseas Operations for Catholic Relief Services (CRS), Sean Callahan is responsible for the oversight of programmatic activities in more than 90 countries, with a budget of over $500 million and a staff of over 3500. He has also served as the regional director for South Asia, overseeing CRS operations in India, Pakistan, Afghanistan, Sri Lanka, Bangladesh, and Nepal. He brings a wealth of additional experience, managing CRS work in multiple sectors, including child survival, emergency response, and post-conflict reconstruction, and in multiple locations, including Africa and Central America. Callahan holds an MA in Law and Diplomacy from the Fletcher School of Law and Diplomacy at Tufts University.