During a speech at the University of Notre Dame today (March 18), the U.S. Ambassador to the Holy See Kenneth Hackett addressed the nature of the Holy See’s diplomatic work, and spoke about the impact of Pope Francis’ encyclical Laudato Si’. 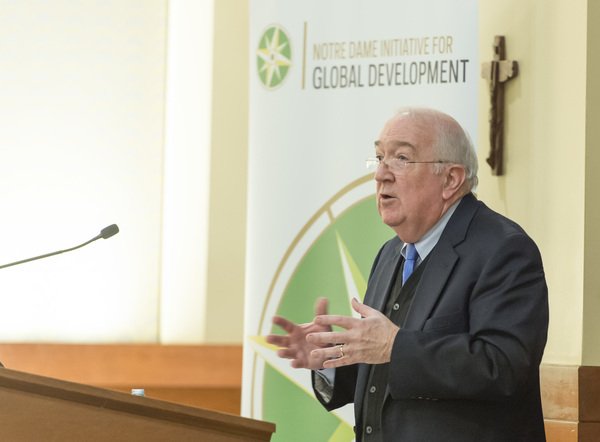 Hackett said the Pope’s climate change encyclical “is a perfect example of what the Church and Holy See can offer on the world political stage in terms of highlighting key global issues and using its moral authority to effect change.

“Since the release of the encyclical, we’ve seen a number of major initiatives to combat climate change in the United States,” he remarked.

Hackett also provided a ‘Vatican 101’ – demystifying the Vatican and its structure with an overview of the Holy See, explaining its role as the governing body of the Roman Catholic Church that helps to support the work of the Pope in exercising his role as Supreme Pontiff.

“Francis is changing things. His entire emphasis on mercy presents a challenge to his critics. If God is mercy then should we not accept that mercy and act in different ways in relation to each other and our common home?

“Maybe the barriers that have existed for centuries around religious beliefs, around our political ambitions, around how we see each other, should change.”

The event was organized and sponsored by the Notre Dame Initiative for Global Development (NDIGD), an integral part of Notre Dame’s new Keough School of Global Affairs.

Originally published by Notre Dame News at news.nd.edu on March 18, 2016.