Arriving from home institutions across the United States and overseas, six new visiting fellows are settling in at the Kellogg Institute for International Studies, joining one fellow already in residence.

With fellowships for the fall semester and the acacemic year, the visiting fellows will conduct independent and collaborative research related to core Kellogg themes of democracy and human development. Regions of study include East and West Africa, Latin America, Europe, and South Asia. 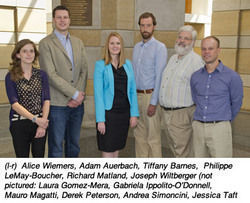 "We are delighted to welcome this year's cohort of visiting fellows," says Institute Director Paolo Carozza. "It is a remarkably diverse and accomplished group. Even more important than any one scholarly project, however, are the human encounters we are looking forward to having together as park of the Kellogg community of scholars."

Richard Matland, a political scientist from Loyola University Chicago, will be analyzing data from a series of NSF-funded experiments that tested the levels of social capital and trust in Russia.

Phillippe LeMay-Boucher, and economist at Herlot-Watt University in Edinburgh, is also using his time at the Institute to analyze the results of a field experiment, this one conducted in Senegal, with the goal of understanding how to improve malaria prevention.

Alice Wiemers, a historian at Otterbein University in Ohio, is studying 70 years of development practice in West Africa through the lens of the experience of a small town in Ghana recently named a “Millennium Village.”

The Institute’s themes of democracy and human development intersect in two other projects.

Adam Auerbach, a political scientist, is investigating how residents of urban slums in India are able to demand development projects from their government.

Joseph Wiltberger, an anthropologist, is exploring collective struggles to construct viable alternatives to undocumented emigration in El Salvador and Central America. (A 2001 Notre Dame graduate, he first did research in El Salvador as a Kellogg Latin American Studies Program minor.)

In addition to Wiltberger, two political scientists are working on Latin America, a longtime strength of the Kellogg Institute.

Tiffany D Barnes, of the University of Kentucky, is examining how women’s legislative behavior has changed in Argentina after a dramatic rise in the number of women legislators in a variety of institutional contexts.

Two more visiting fellows will be arriving from Italy later in the semester. Mauro Magatti, a sociology professor at the Catholic University of the Sacred Heart in Milan, will be collaborating with Andrea Simoncini, a constitutional law professor at the University of Florence, to study the evolution of civil society in Europe.

The group will be joined in the spring by three additional fellows.

The Institute also welcomes several guest scholars who have received outside funding to support their research at Notre Dame. For a complete list of the 2013–14 visiting fellows and guest scholars, click here.