The University of Notre Dame collaborated with distinguished national leaders in government and business to present a day-long Forum on Global Development in our nation's capital, focusing on the University's involvement in development programs world-wide.

The Nov. 10 inaugural event at the Willard InterContinental Hotel in Washington, D.C., was scheduled to coincide with the Notre Dame vs. Maryland football game at Fed-Ex Field on Nov. 12, and with other related events.

Among the guests attending the forum were members of Congress and officials of the Department of State, the United States Agency for International Development (USAID), the Department of Defense, and other government agencies. Notre Dame faculty and staff were joined by representatives of the University's other implementing partners in global developmentL foundations, NGOs, business corporations, and humanitarian organizations. Notre Dame alumni - a critical component of the University's work around the world - were well represented among the panelists and members of the audience.

The featured guest luncheon speaker was Ambassador Donald Steinberg, Deputy Administrator at USAID, whose remarks served to further illuminate and reinforce the Forum's three-part theme: invest in development; build infrastructure; and enhance human dignity. Ambassador Steinberg highlighted USAID's most recent reform agenda which focuses on new partnerships, investment in innovation, and a reinforced commitment to strengthening monitoring and evaluation as articulated in the Quadrennial Development and Diplomacy Review (QDDR).

Throughout the discussions, panelists emphasized the importance of prioritizing humanitarian response and assistance in connection with global development initiatives. It was noted that universities can commit a wealth of expertise and time to global development efforts when moving outside the classrooms and laboratories and basing their work in real world problems. 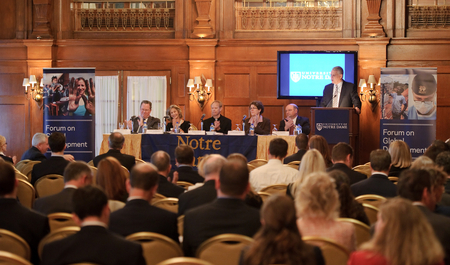 Rev. Robert Dowd, C.S.C., director of Notre Dame's Ford Program in Human Development and Solidarity, said the University "is turning outward...We are moving beyond the ivory towers." He added that these types of global relationships also benefit participating students by giving them a deeper understanding of the world's challenges and opportunities.

In his remarks, U.S. Sen. Dick Durbin, D-Illinois, said, "The work that Notre Dame is doing globally not only alleviates human suffering, but also defines America to the world. Time and time again Notre Dame has risen to the challenge, adn today we need you more than ever." He referred to Notre Dame's presence in the global community as "stellar," and said that the University brings real value to the table.

With the launching of the Ford Program in 2008, Notre Dame's Kellogg Institute for International Studies has expanded its scope to include human development work in Africa. Human development at Notre Dame involves efforts to understand conditions that affect human welfare, including economic growth and developmetnl the political and social determinants of the distribution of wealth and opportunity, politics and public policy, religion and culture, health and human rights.

The second panel focused on development and health in Haiti, with an overview of how charitable foundations and Notre Dame's Haiti Program, the Eck Institute for Global Health, the College of Engineering, and the Institute for Educational Initiatives (IEI) are fighting disease and building infrastructure. Dean Gregory Crawford of the College of Science at Notre Dame served as moderator. Among the speakers were Sen. Durbin; Rev. Thomas Streit, C.S.C., director of the Notre Dame Haiti Program; Tracy Kijewski-Correa, Linbeck Associate Professor in the Department of Civil Engineering and Geological Sciences; Suki McClatchey, senior manager for global citizenship and policy at Abbott; and T.J. D'Agostino, program coordinator for IEI. 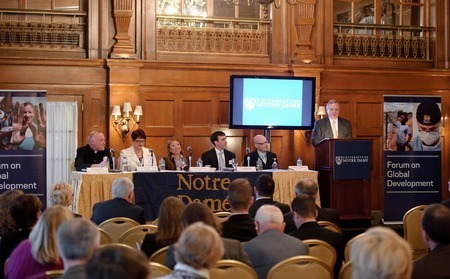 David Murphy, former president and CEO of Better World Books, moderated the afternoon panel, with discussion centered on the importance of business and overseas investment for generating prosperity and raising living standards. Presenting their unique perspectives on the topic were the honorable Susan Reichle, assistant to the USAID administrator, Bureau of Policy, Planning and Learning; Kelly Brooks, director of international government relations and public affairs for the Coca-Cola Company; Kristin Hughes, representing Notre Dame's Mendoza College of Business on the Frontlines; and Molly Kinder, USAID director of special programs for development innovation ventures. The Notre Dame Haiti Program has gained international acclaim in its battle to eradicate lymphatic filariasis (LF). The Haiti Program has implemented new solutions to fighting LF, including a community-wide pilot program in Miton using co-fortified iodized DEC salt, which has dramatically halted transmission of the disease. The Haiti Program is just one of many projects associated with the Eck Institute for Global Health, a University-wide venture that promotes research, training and outreach to advance health standards for all people - and especially those in poorer nations.

Spreakers offered concrete examples of how Notre Dame embraces a holistic approach, applying its research and training resources to the following global challenges: security and peacemaking, public health, infrastructure improvement, energy, the environment and sustainability, governance and the rule of law, commerce and economic development, and education.

Wrapping up the program, Ambassador Roemer said: "Today's Forum on Global Development is just the beginning of a new initiative to join Notre Dame with businesses, government agencies and corporations, all working together to move America into the next century with a plan for sustainable development and abetter world. It's good to see so many people who are passionate about global development coming together and talking like this."

Roemer also applauded the spirit of optimism created at the forum, and he challenged those present to fuel the spark that was ignited that day.

Notre Dame's vice president for research, Robert Bernhard, whose office organized the forum, was pleased with the synergy generated in the room by the panel discussions and resulting networking. He thanked Ambassador Roemer and the distinguished panelists for sharing their time, experiences and insights.