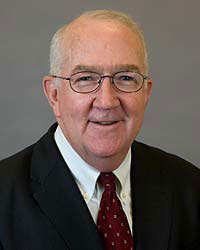 Ken Hackett has agreed to be an advisor to the Notre Dame Initiative for Global Development (NDIGD).

His responsibilities will include working with NDIGD staff to grow and strengthen the initiative, advising on key issues in global development, and assisting the university in engaging in high-impact global development projects with partners worldwide.

NDIGD, based in the Office of Research, is a new multidisciplinary program that leverages the University’s signature strengths to promote development and human dignity to people around the world who are in need. The initiative helps develop solution-oriented research focused on rigorous, data-driven impact evaluation and assessment; design and planning of development projects; and training.

“We’re delighted to have someone of Mr. Hackett’s stature to help us build the NDIGD and identify the next generation of projects for Notre Dame’s contribution to the global development”, says Robert Bernhard, vice president for research.

Hackett was formerly the president of Catholic Relief Services (CRS), one of the world’s most effective and efficient relief and development agencies where he oversaw operations in more than 100 countries, with a global staff of nearly 5,000. Mr. Hackett joined CRS in 1972, starting his career in Sierra Leone. He has served CRS in posts throughout Africa and Asia, as well as in a variety of positions at CRS headquarters. He was the regional director for Africa, guiding CRS’ response to the Ethiopian famine of 1984-1985. He supervised operations in East Africa during the crisis in Somalia in the early 1990s.

Mr. Hackett served as president and CEO of Catholic Relief Services for eighteen years. During his tenure at the head of CRS, the organization expanded worldwide operations to over $800 million and embarked on a concerted effort to engage the Catholic community in the United States in its work around the world. He has served as North America President of Caritas Internationalis, the confederation of humanitarian agencies of the global Catholic Church. He was a member of the boards of the Pontifical Commission Cor Unum, the Vatican body that coordinates the Church’s charitable work; Migration & Refugee Services, and the International Policy Committee of the U.S. Conference of Catholic Bishops; Jesuit Refuges Service and the Africa Society. He has served on the Baltimore Council on Foreign Affairs, and was named to Maryland Governor Martin O’Malley’s International Advisory Council.

In 2004 he was appointed by the President to serve the Board of Directors of the Millennium Challenge Corporation, a federal effort to increase aid to countries that demonstrate a commitment to ruling justly, investing in people and encouraging economic freedom.

In 2012, Hackett was the recipient of the University’s Laetare Medal, the oldest and most prestigious honor given to American Catholics.

Established at Notre Dame in 1883, the Laetare Medal was conceived as an American counterpart of the Golden Rose, a papal honor which antedates the 11th century. The medal has been awarded annually at Notre Dame to a Catholic “whose genius has ennobled the arts and sciences, illustrated the ideals of the Church and enriched the heritage of humanity.”