Ruth Riley ’00 supports NDIGD in service and leadership projects in developing countries. She returned this week from Saudi Arabia, where she served as Sports and Women’s Empowerment Envoy with the U.S. Department of State. Ruth’s role as an envoy is to inspire women and girls through sports, and support the recent change in Saudi Arabia that now allows physical education for girls.

Imagine a woman covered head to toe in a loose fitting black robe (Abaya) with her head covered by a hijab so the only part of her body that you can see is that by which she is looking back at you…her eyes.  It is against the law for her to 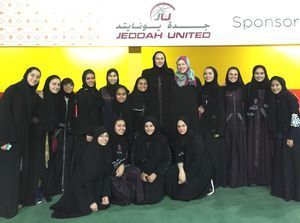 drive.  She cannot travel by herself without the consent of a male relative.  Almost every public place is segregated, with one door for women/families and one for men. Her only knowledge of sports is that by which she sees on T.V. or on the internet because there are no opportunities for her to partake as a spectator, let alone as a competitor. This image is representative of what we know of Saudi Arabian women.

While I agree that a picture is worth a thousand words, I want to share with you some of the stories beyond that image that we so often evoke.  Stories of the girls and women that I met in my recent Sports and Women’s Empowerment Envoy with the State Department and the NBA/WNBA throughout The Kingdom.  Becky Bonner and I went from the conservative capital of Riyadh to Dammam and finished our trip in the more liberal city of Jeddah conducting clinics with elementary to college age players as well as meeting with some amazing groups of women.

The week before we left, I learned that the King recently passed a law mandating that physical education now be included in the curriculum in the public schools for girls. Similarly, a piece of legislation called Title IX changed the entire trajectory of my life as a female athlete.  I cannot help but wonder how long it will take to turn this decree into a reality.  While this is theoretically a giant step toward progress, it is still an unrealizable gain because the obstacles are far greater than what we faced in the United States.  They are not only challenged by the conservative opposition within their culture, they do not have the facilities, female P.E. teachers or enforcement infrastructure to ensure that it is carried out.

Only within the last year has the government decided to legally recognize gyms for women.  Prior to that, they were denied a license to operate and had to be called “spas” or “health centers.” Even so, only the elite can afford membership to these facilities.  In a country with the second highest obesity rate in the world for women and extremely high percentage of the population with diabetes, one could argue that not providing a culture that promotes women’s fitness starts as a fundamental global health issue, before it reaches a gender equity issue.  Women cannot swim and if they want to ride a bike or go for a jog they must brave the desert heat and do so fully clothed in an Abaya.  Gyms are costly, if available at all.  Beyond implementing the new legislation in schools, public facilities also need to be created to provide women a culturally acceptable environment to physically take care of their bodies.  This is the foundational framework that must be established first, and then sports can be built upon that.

Just like a hologram photo that changes as one ever so slightly turns the angle by which they are looking, I saw a different side of these Saudi Arabian women than the oppressed females that are constantly being portrayed in the media.  These women are incredibly intelligent.  While their education might be segregated after a certain age, most of the girls will not only complete high school, but many will go on to partake in the largest scholarship program in the world and study abroad at various universities.  One of the most fascinating lunches we had was with a round table of women ranging from the first female lawyer to entrepreneurs, filmmaker to a coach.   The ladies we met were incredibly inspiring not only because of their intelligence, but also their determination, resourcefulness and resolve.  They recognize that the road to progress is paved with passion as well as patience and they are relentless in their pursuit to push forward.

Besides the incredible hospitality that was shown to us everywhere we went, there was another common theme at all of our clinics.  Regardless of age, we found all the players were extremely excited to absorb anything we could teach them.  It would be unrealistic for us to have an expectation of a high talent level in a society that does not openly accept, let alone promote, female sports. Our objective was to grow the game on a grassroots level, and to inspire and encourage as many girls and women as possible.  It was incredibly rewarding to not only see their enthusiasm to learn but also to see how quickly they grasped what we showed them.

These girls truly played because they love the game.  There are minimal opportunities for them to even compete against other teams.  They have no National Federation, which means they cannot compete in any of the international competitions.  Even if they did, it is sad to say that FIBA (International Basketball Federation) has yet to follow FIFA’s (International Federation of Association Football) footsteps in allowing girls to wear their hijab (head covering) when they play.  Ironic that the western world is quick to criticize their culture for limiting opportunities for girls, yet we have a very narrow minded, judgmental view of what a female athlete should look like.  We cry for equality, yet we prohibit girls/women from Islamic countries from competing in their culturally appropriate attire?

Change takes a consistent, collective effort. The international community must continue to pressure for women’s rights and equality, charismatic leaders within the country must continue to courageously pursue progress, and endless work on the grassroots level must be conducted to capitalize on the fundamental opportunities as they are awarded. Now, when I picture a woman head to toe in a loose fitting Abaya, I believe she can be a symbol for intellect and resiliency.