What can the glazes used on Mexican artisanal ceramics reveal about the global economy? Plenty, says political scientist Steven Samford, who spent academic year 2012–13 as a Kellogg visiting fellow.

When threatened by international competition, small firms can respond either by squeezing wages and working conditions or by upgrading their skills and equipment, he says. Some choose the cost-cutting “low road,” while others invest in the increased productivity of the “high road.”

In his investigation of ceramics production in Mexico, Samford set himself this puzzle: when faced with restrictions on producing and exporting products with lead-based glazes, why do some producers upgrade to lead-free versions, while others resort to trying to undercut competitors on price?

Government agencies in Mexico have encountered obstacles as they encourage ceramicists to make the switch—of the country’s more than 10,000 ceramics makers, the majority have not changed their glazes, despite the many benefits of doing so. 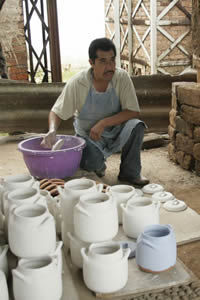 “Switching promises to improve artisans’ health, environment, and working conditions, as well as their ability to access more lucrative foreign markets,” says Samford, who spent a year in Mexico gathering a wealth of data.

“However, the diffusion of [new] technology has been complicated by information gaps between the public and private sectors and between enterprises themselves.”

He interviewed state and national officials about campaigns to develop and encourage the use of the non-toxic glazes, pored over government documents, observed ceramics production in home workshops, and surveyed over 200 ceramics makers in a single Michoacán community to map their contacts with others in the industry.

The network map he developed became the key to understanding why government agencies succeeded in convincing some producers, but not others, to switch.

Drawing on network theory, Samford concluded that for small-scale producers to adapt positively to international competition, they need significant links between public and private networks to spread awareness of and access to new technologies. In a low-tech industry like pottery, where most producers live in isolated rural areas, the public and private spheres have to “co-produce” a positive change.

“Mexican officials say, ‘we need a way to diffuse this technology, but we don’t have any ties to this community,’ Samford explains. “They recruit a community member to pass along information about the new technology.”

That liaison typically works with existing professional organizations to gather and train artisans who could benefit from instruction in switching glazes. The difference between those who get the training and those who don’t comes down to whom they know.

“Those with membership in a formal organization clearly have better access to information, while those without strong ties are basically unable to access information about the new lead-free technology,” says Samford.

Statistical analysis of his survey data shows that producers with formal and informal ties to other potters had about a 50 percent chance of switching to lead-free glaze within a dozen years, while those without such ties had only a 5 percent chance of doing the same.

As a political scientist, Samford is particularly interested in how the state can most effectively promote public goods. He contends that understanding the impact of national politics and policies on previously little-studied small businesses is vital for policymakers.

“Looking at these kinds of low-tech, small industries can have immense developmental impact because the vast majority of people in the developing world are employed in these kinds of businesses,” he says.

“The average Mexican or Salvadoran or Bangladeshi doesn’t work in an advanced industry, in a large business. They’re working in small enterprises and home workshops.”