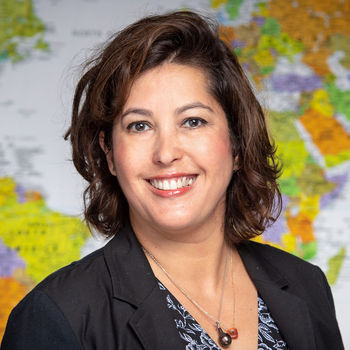 A researcher at the Notre Dame Initiative for Global Development (NDIGD), has co-authored two policy briefs on gender economic equity, which were recently published by Think20 (T20) Argentina at the 2018 G20 summit.

The briefs were co-authored by Estela Rivero, a research associate at NDIGD, who sat on T20 Argentina’s Gender Economic Equity Task Force throughout 2018.

In "Achieving '25 by 25': Actions to Make Women's Labour Inclusion a G20 Priority," the task force identifies several innovative solutions that G20 countries might implement in order to reduce the gap in labor participation between men and women by 25 percent by 2025—a goal that the G20 countries have, so far, made little progress toward.

In 2017, the World Bank estimated that less than 50 percent of women participated in the global labor force, compared to over 75 percent of men. These participation rates have remained relatively unchanged since the G20 committed to the "25 by 25" initiative at the 2014 summit in Brisbane.

In order to close the labor participation gap over the next six years, the task force recommends six solutions for countries to implement, such as "relaxing constraints on women’s time," "fostering women in STEM careers and traditionally male-dominated sectors," and "removing legal barriers to women’s economic empowerment," among other solutions.

In "The Imperative of Addressing Care Needs for G20 Countries," the task force examines the growing care needs of the world’s aging population and "why addressing care needs is fundamental for women’s economic empowerment and labour market participation."

"Rising female labour market participation in most of the world has not occurred with the equivalent redistribution of unpaid care work and as a result time burdens have risen and care provision has been compromised," explain the authors in the brief. "The goal is to develop health care, education and social protection systems that support caring without penalty, either for those who receive care or for those who may choose to enter the labour market."

The two briefs were formally released and distributed during the two-day G20 summit in Buenos Aires. Argentina is the first South American country to host the G20 summit since the founding of the group in 1999.

"Working on these briefs was an extraordinary experience. I enjoyed exchanging results and ideas with researchers from many different parts of the world, and finding that they point towards common recommendations," said Rivero. "In the framework of this participation, I presented my research about population aging effects on care and the future of work in a workshop directed towards finance ministers. The presentation was an excellent opportunity to sensitize relevant audiences that are commonly skeptic of gender issues of its relevance for economic growth."

Rivero’s primary research interests include violence prevention, migration, education, youth, and the care economy. As a social demographer, she specializes in the formulation and implementation of research studies aimed at improving social interventions and programs.

The Think20 (T20) is a network of research institutes and think tanks from the G20 countries, which aims to "add value to the G20 process with evidence-based public policy proposals on areas of interest for the international agenda."