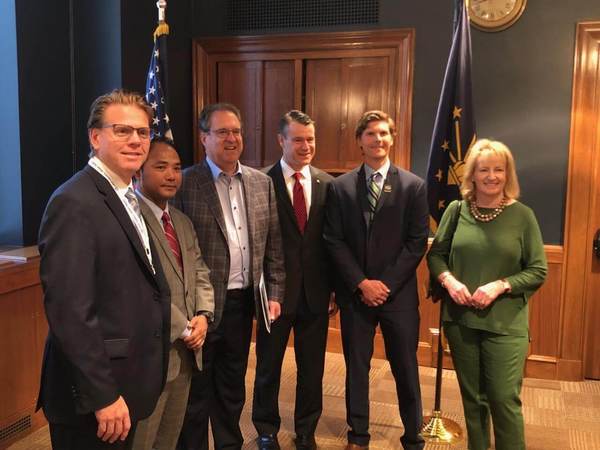 Sweikar (second from right) in the office of U.S. Senator Todd Young from Indiana.

Michael Sweikar, the executive director of the Notre Dame Initiative for Global Development (NDIGD)—an integral part of the Keough School of Global Affairs at the University of Notre Dame—recently joined other U.S. global leaders on Capitol Hill to advocate for the United States to continue to play a global leadership role through development and diplomacy.

Sweikar serves as an Indiana advisory committee member to the U.S. Global Leadership Coalition (USGLC). Between June 17-18, he and other advisory committee members from across the country convened in Washington, D.C., at the annual USGLC State Leaders Summit. "When the U.S. is at the forefront of global leadership it builds economic prosperity and strengthens our humanitarian values, but it also protects our own national security," explains Sweikar. "Throughout the USGLC State Leaders Summit, I was able to meet with various senators and representatives from Indiana and encouraged them to support the FY20 International Affairs Budget, which is needed if the U.S. is to remain a strong, global leader."

"The International Affairs Budget is typically only around one percent of the total federal budget of the U.S. government. Advocating for the International Affairs Budget now is especially important at a time when the current administration is calling for deep and disproportional cuts," says Sweikar. "These cuts—particularly those targeted at countries in Central America—would impede our country's ability to protect its national security and interests, as well as play a role as a force for good in the world. Instead of broad cuts, the administration and Congress should focus on using evidence-based research—like that which is produced at NDIGD and the Keough School—to evaluate the foreign aid or development programs that are working and fund those programs."

The majority of the International Affairs Budget is used to fund the work of government agencies, including the United States Agency for International Development (USAID), the U.S. Department of State, and the Millennium Challenge Corporation (MCC). According to the United Nations High Commissioner for Refugees (UNHCR), there are currently more than 70.8 million people displaced from their homes and communities—more than at any other time in history. These agencies, in partnership with organizations like the University of Notre Dame, work to address the root causes of displacement, hunger, violence, and other pressing global challenges.

The USGLC "works in our nation’s capital and across the country to strengthen America’s civilian-led tools — development and diplomacy — alongside defense. By advocating for a strong International Affairs Budget, the USGLC is working to make America’s international affairs programs a keystone of U.S. foreign policy."