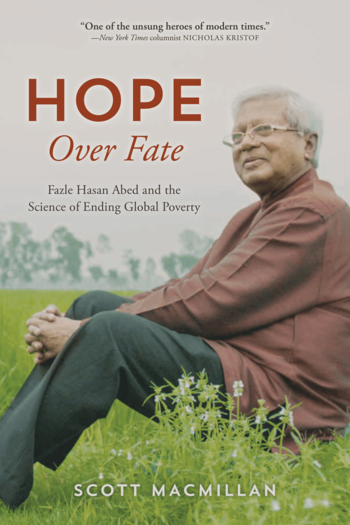 Fazle Hasan Abed may be the most influential man you’ve never heard of.

A former finance executive with almost no experience in relief aid, he founded BRAC in 1972 aiming to help a few thousand war refugees. A half century later, BRAC is by many measures the largest nongovernmental organization in the world—and by many accounts, the most effective anti-poverty program ever.

Its scale is massive, with 100,000 employees reaching more than 100 million people in Asia and Africa. BRAC seems to stand apart from countless failed development ventures; and Abed’s methods changed the way global policymakers think about poverty.

Join us as we welcome Scott MacMillan, author of “Hope Over Fate: Fazel Hasan Abed and the Science of Ending Global Poverty,” and representatives from BRAC on campus to share the untold story of one of the world’s most successful NGOs and the man behind it all.

Scott MacMillan is the director of learning and innovation at BRAC USA, an affiliate organization of BRAC, where he has worked since 2011. A former journalist, he served as the speechwriter of Sir Fazle Hasan Abed, the founder of BRAC, prior to Abed’s death in 2019.

Dr. Samia Huq is an anthropologist and Professor at the Department of Economics and Social Science at BRAC University, Dhaka, and Dean of the General Education Department. Her current research includes cultural activism of Bengali Muslims of East Pakistan, and the impact of secondary secular and madrasa education on gendered norms and practices, as part of the Initiative on Education, Gender and Growth in Asia.  Dr. Huq also coordinates the BRAC University-Georgetown University Speakers’ Forum series, and is also engaged in ethnographic research on faith inspired development actors in two districts of Bangladesh through their Berkley Center for Religion, Peace and World Affairs.

Dr. Mushtaque Chowdhury joined the Mailman School of Public Health at Columbia University in 2004. Dr. Chowdhury has international experience working in diverse situations such as Bangladesh, Pakistan, Nepal, Thailand, China, and Ethiopia, and currently serves as Vice Chairperson of BRAC in Bangladesh. Dr. Chowdhury is the founding Dean of BRAC University's James P. Grant School of Public Health in Bangladesh. He also founded the Research and Evaluation Division of BRAC, an NGO which is particularly concerned with poverty alleviation, education, and health.

Michael Bowler, Ph.D. (Syracuse University) is a Notre Dame alumnus ('77), and associate professor of Global Studies and World Languages at Winona State University (Winona, Minnesota). He is a past vice president and long-time trustee of the American Institute of Bangladesh Studies. As the first junior fellow of the then newly formed American Institute of Bangladesh Studies, Bowler had the good fortune of becoming a BRAC Research Associate, conducting his doctoral research in the Village Study Program in Monirampur Upazila (SW Bangladesh). Dr. Mushtauque Chowdhury of BRAC has been and continues to be another key mentor. Bowler has continued to follow this village for the past 40 years in his research and teaching.

BRAC, originally the Bangladesh Rehabilitation Assistance Committee, was founded 50 years ago in Bangladesh in the wake of a war that secured the nation’s independence and a devastating cyclone that left it paralyzed. From those humble beginnings, BRAC has evolved to become the world’s largest Southern-based international development organization.