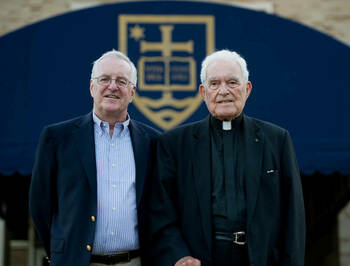 Join the Pulte Institute for Global Development as we celebrate the Peace Corps and its connection to Notre Dame during a special viewing of the documentary film A Towering Task: The Story of the Peace Corps.

Tickets are available at the DeBartolo Performing Arts Center website and at the box office (574.631.2800). The screening is free but ticketed. Click here to reserve your tickets.

The Peace Corps and Notre Dame

In March 1961, R. Sargent Shriver contacted Rev. Theodore M. Hesburgh, C.S.C. to ask for his help in establishing a program for the Peace Corps: a new agency President John F. Kennedy had just established. Father Hesburgh, in partnership with the Indiana Conference on Higher Education, organized for 45 young volunteers to come to Notre Dame’s campus for a 10-week training before traveling to Chile to serve in rural communities.  The Peace Corps Act was passed by Congress in September 1961; shortly after the young cohort arrived in Chile, making them among the first 100 volunteers to serve in the Peace Corps. Since then, more than 240,000 Americans have followed in their footsteps.

Thomas Scanlon '60 (pictured left with Father Hesburgh) was among the 45 volunteers who traveled to Chile on that first mission. Cited by President John F. Kennedy for his service and commitment to the goals of the Peace Corps, Tom is now the President of an international consulting and advocacy firm. His memoir, Waiting for the Snow, recounts his Peace Corps experience.

The event will feature an interview between Tom and Jaclyn Biedronski, a program coordinator for the Pulte Institute's Evidence and Learning Division and a graduate of the Keough School's master of global affairs program. Jaclyn served in the Peace Corps as an education specialist in Mozambique. Together, Jaclyn and Tom will share their experiences of the Peace Corps and Notre Dame.

Host country nationals, Peace Corps Volunteers and staff, and scholars and journalists take a closer look at peace building, economic development, and political independence through the Peace Corps’ nearly six decades of trials and transformations. Directed by Alana DeJoseph and narrated by Annette Bening, the documentary seeks to preserve the legacy of the Peace Corps while maintaining an independent, objective approach to the filming and to catalyze dialogue about what it means to be an American, both in the U.S. and as part of a broader global community.